Growing Pumpkins in your home garden is a fun and easy crop to grow.  But watch out, it takes a lot of space! 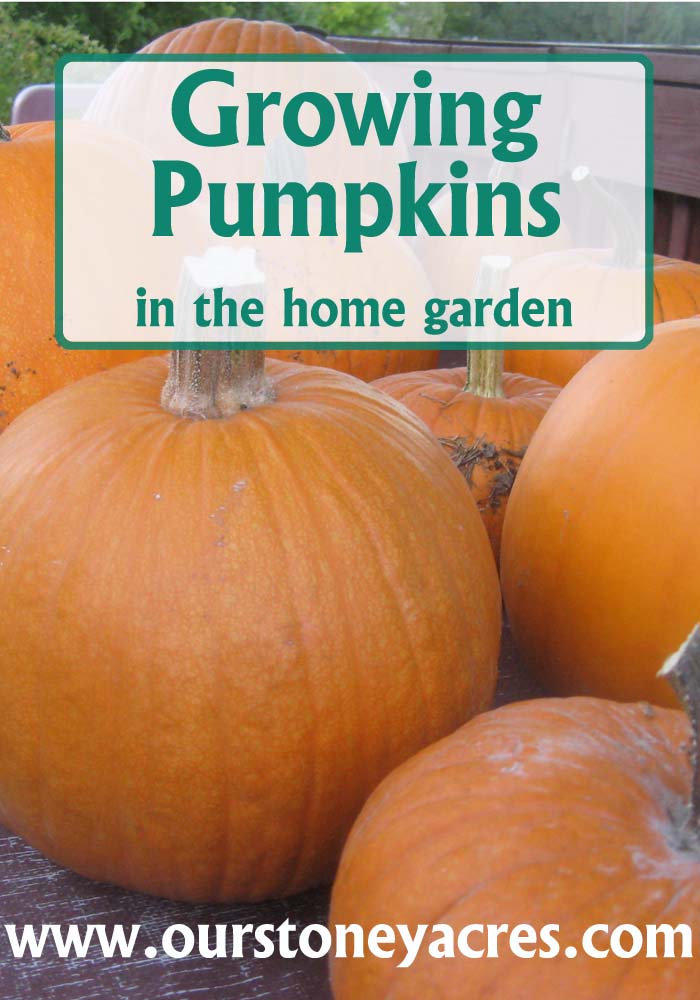 Growing Pumpkins has always been one of my favorites. Part of that appeal might come from the fact that pumpkins were one of the first real successes I had as a gardener. It was the first year we had an “official” garden, we had just moved into our new home and I took our two youngest out and had them help me plant the pumpkin seeds. They were tucked into a back corner of the garden and most of the vines grew out into our neighbors horse pasture. That one little hill of pumpkins gave us 7 carving sized fruits. The kids were thrilled and so was I!!

Ever since, the kids and I have tramped out together to the garden and planted a few hills of pumpkins. It has been a fun tradition that I will miss now that they are all nearly grown! (the kids not the pumpkins).

For a home gardener pumpkins are fairly easy to grow and relatively pest free. But be warned growing pumpkins requires a lot of space! So you will need to learn to be creative!!

How to get started growing pumpkins

Keep in mind that pumpkins are a vining plant and require A LOT of space. One pumpkin vine will grow up to 20 feet and for a decent crop you need at least a couple of plants. So you need to plan carefully where you are going to grow your pumpkins!

They will need a sunny spot with lots of room to sprawl. It is possible to train the vines to stay in one area, but that area should be at least 10 foot square. Pumpkins can also be grown on a trellis to help save space, but larger fruits may need some support as they mature. 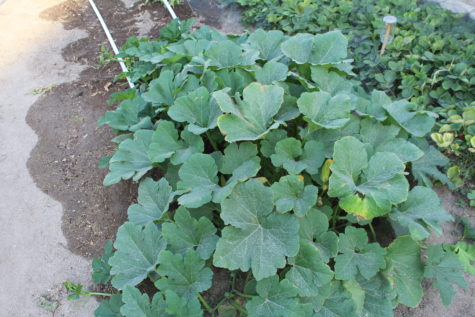 You can prune pumpkin vines. Wait until the vine has produced at least one male flower and one female flower (I will explain flowers in a bit). Then prune the vine just past the first female flower. This will encourage other “side shoot” vines which can also be pruned. Pruning will encourage the plant to grow several smaller fruit instead of just one or two larger ones.

Pumpkins like fertile soil so amending the soil with at least 2 inches of quality compost or well rotted manure before planting (or even the fall before) is a good idea.

I have seen folks that have used longer flower beds to plant pumpkins. Pumpkin vine will fill up the bed (with a little training) and make an attractive green plant!

Pumpkins are planted like any other winter squash, in the late spring. They are a warm season crop and should be planted after any danger of frost has past. If you plant sooner be prepared for cold nights and cover the plants with some type of row cover or clotch. You need to wait to plant pumpkins until the soil temperature has warmed to 65 degrees. I love my handy soil thermometer

to help me know when it’s time to plant. You can warm the soil earlier using some plastic (Read more about this technique here)

I like to plant pumpkins in “Hills”. Technically speaking a hill is just a grouping of plants, It doesn’t actually have to be a HILL. But I like to mound up a hill about 18 inches wide and 4 to 6 inches high. This gives me a good spot to plant my seeds or transplants and I’ve found hills with a little depression on top are easier to water.

Leave at least 5 feet between hills.

Plant each hill with 4 or 5 seeds spaced evenly around the hill. Once the seeds have germinated and are up and growing I remove all but the two healthiest plants.

Most pumpkin varieties take between 90 to 120 days from planting to mature. So if you have a shorter growing season you can get a bit of a head start by starting your seeds indoors 2 to 3 weeks before you intend to plant them out. Once the seedlings are ready you should put 2 seedlings in each hill. Keep in mind that all types of squash plants don’t really transplant all that well. So it is important to only give them 2 or 3 weeks indoors, you want small new plants with only a few leaves. Older plants that have already started vining will not do nearly as well. (learn more about seed starting by taking my Seed Starting Simplified course)

The only care pumpkins really require while growing is weeding and plenty of water. They prefer moist soil, so be sure they are planted in an area where you can keep them watered. 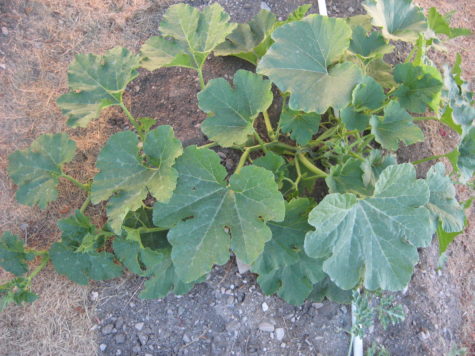 While they are growing keep those vines trained and contained in the area designated for them. Out of control pumpkin vines can shade the rest of the plants in your garden. So keep them under control.

Like all other members of the Squash Family, pumpkins develop flowers of both genders. It is easy to tell the difference. Male flowers just have a long flower stalk behind the flower, female flowers will have a small baby pumpkin behind the flower. Pumpkins are insect pollinated so be sure to avoid any pesticide use in your garden that might kill bees or other pollinators.

If you feel like your female flowers are not getting pollinated you can do it by hand. The easiest method is to carefully remove all of the flower petals from a male flower. Then gently rub the remaining flower parts all around the inside of a female flower. I have also seen folks hand pollinate using a small soft paint brush, taking pollen from the male flower and transferring it to the female flower. But ultimately bees do a better job, so do all you can to protect your local bee population!!

Growing Pumpkins will start out green and late in the season they will slowly take on their traditional orange color. Color is not an indication of ripeness. You should try to leave your pumpkins on the vine as long as possible. It is best to leave them until the first frost kills your vines. 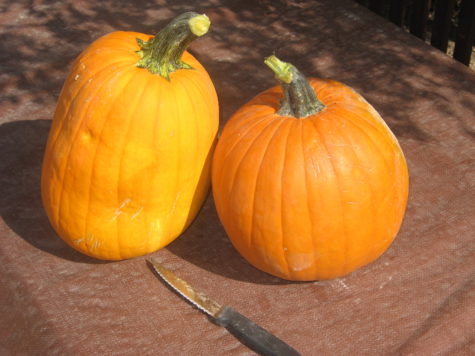 Once the pumpkins are ready to harvest cut the growing pumpkins from the vine with a pair of garden shears or a very sharp knife. Leave at least 2 inches of vine attached to the pumpkin.

Leave the pumpkins on a sunny porch for at least a week. This helps the skins to harden and cure and will give you a longer storage time. But be sure to protect them from frost on cold nights. 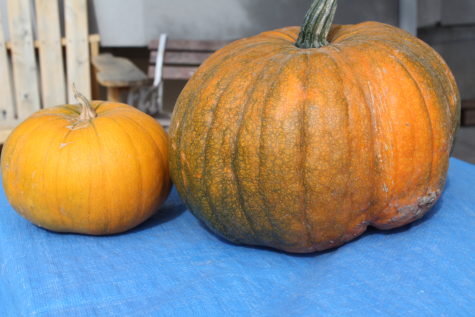 If cold weather forces you to bring in your pumpkins before they have completely ripened, never fear.  Just bring them inside and place them in a warm sunny window for a few weeks and they will ripen!

Most varieties of pumpkins will last in storage for 3 to 4 months. Keep them in a cool spot (50 to 60 degrees) for the longest storage.

There are 4 main types of pumpkins

These are the traditional jack-o-lantern pumpkins used for Halloween carving! The flesh of these types of pumpkins is eatable but they are really not the best type to grow if you are looking to eat your pumpkins. The flesh on these carving pumpkins is stringier and less flavorful. But the seeds from carving pumpkins are delicious roasted and are VERY nutritious. 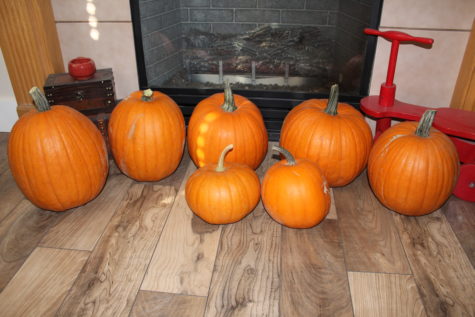 These are smaller, sweeter pumpkins that have flesh that is more tender and tasty. These pumpkins are traditionally used for pies and other baked goodies. They have much thicker flesh and a smaller seed cavity. The seeds on these pumpkins are also eatable. If you are looking to replace the flavor and texture of store bought canned pumpkin, you could also consider growing Butter cup squash. Believe it or not most of the canned pumpkin you buy at the store actually isn’t pumpkin at all, but instead Butter Cup or other squashes.

These are the huge 300 pound giants you see grown for all the contests every fall. They are very specialized to grow and take a lot of time and experience. But if you are looking for bragging rights in your neighborhood these are the plants you want to grow.

Technically many of the funny shaped and colored pumpkins you see are squashes. But they are grown the same way and can give you some fun variety to your fall decorations. Most of these varieties are also eatable and you may even like them better.

If you like pumpkin seeds there are also varieties you can grow that have “hull-less seeds” they are nice for eating but I have found them a little difficult to grow.

Pumpkins are troubled by cucumber beetles, squash bugs, squash vine borer and also powdery mildews. There are also some viral and bacterial wilt diseases that can affect pumpkins but these are less common.

There are some conventional non organic treatments for powder mildew, but I have found that early planting and good crop rotation usually keeps that problem at bay in my garden long enough to get a harvest.

Dealing with the pests is usually just a matter of vigilance. You need to keep an eye on your plants, inspecting the leaves often looking for both damage and egg clusters. The photo above is a shot of an egg cluster for squash bugs. Look for these and remove and destroy that section of the leaf. Adult bugs can be sprayed, but they are pretty tough and usually traps (or paying the neighborhood kids to catch and squash them) is just as effective. 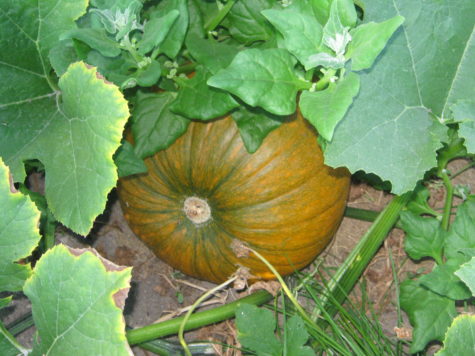 I hope this article encourages you to start growing pumpkins. I love having them in our garden and grow at least one hill each year, even now that we don’t have little kids around. There is just something satisfying about seeing those large leaves and sprawling plants in my garden. And it’s fun to peak beneath the canopy of leaves and find those growing pumpkins all around the garden! 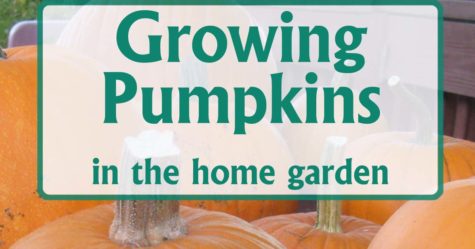