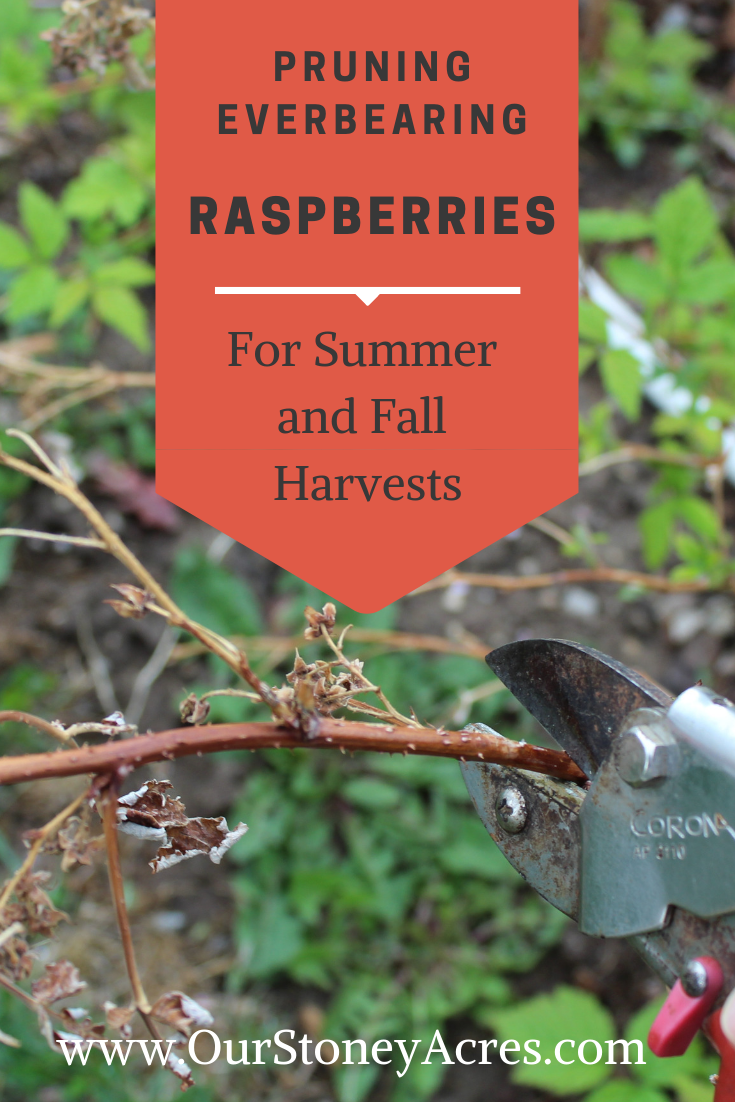 What are everbearing raspberries?

Brambles (blackberries and raspberries) generally are biennial plants, meaning the first year’s cane growth (primocanes) produce only leafy growth and the flower buds that will bloom the next year. In the second year, those canes (now called floricanes) produces the flowers and fruit. This is the case with traditional June-bearing raspberries.

But everbearing raspberries are different. The first year’s growth will actually produce a heavy crop in the fall and then with proper pruning, they can also produce a smaller crop the following summer. Hence the name everbearing, a row or patch (in my case) of raspberries when properly pruned will produce an early summer crop (June/July) and then a later fall crop (August/September/October). The early summer crop will always be much smaller but you will usually have a continuous harvest from late June to the first hard frost. 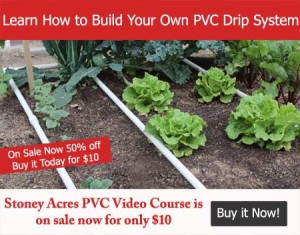 There are two methods for pruning everbearing raspberries. The first is more difficult and will produce 2 crops. The second is easy but only produces a fall crop each year (although this is by far the larger crop). I will describe each method below.

When should you be pruning everbearing raspberries?

My preferred time for pruning everbearing raspberries is in the spring, just as the new growth is emerging from the ground. This has the advantage of allowing you to see where new canes are going to be growing this year and allow you to thin entire plants when necessary I also like the spring because I always seem to have more time in the spring to get the pruning done. I’m so rushed in the fall that I never have time to get to it. I also think it is easier to prune the canes when all the leaves are off. But if you prefer, there is no reason you can’t prune in the late fall after the leaves have fallen off the canes. That is especially true of method #2.

One warning before you begin. Raspberries are thorny, sticky plants. When pruning ever-bearing raspberries you should wear heavy gloves, long sleeves, and eye protection! Without it, you will be pulling thorns and healing scratches for weeks afterward!

The first year your raspberry patch is fully established you will notice that fruit production always begins at the tip of the cane and works it’s way down the cane towards the base. Once a cane has produced fruit on the end of the cane there will be no more production on that part of the cane, in fact, it will often die off. 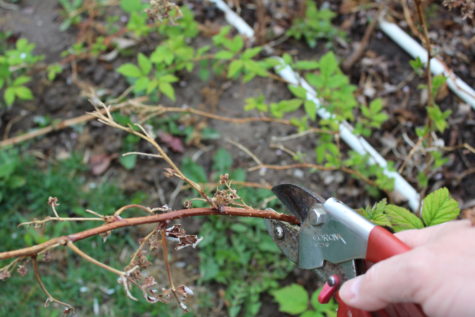 So when pruning for 2 crops you remove the portion of the cane that has already produced fruit the prior year. 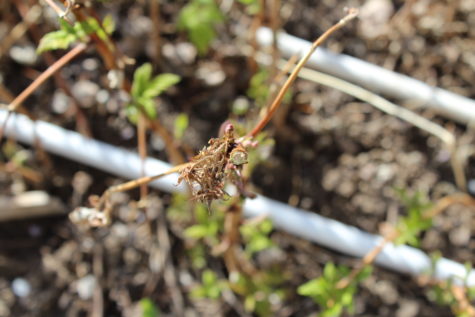 This can be a tedious process as you will need to prune the ends off of nearly every cane in the patch. You know you have pruned to the right spot when you can see a bit of green at the end of the cane where you cut it, like the picture above.

If when you prune the cane the cut end appears dry and dead, then you can cut a little further down the cane until you find green. 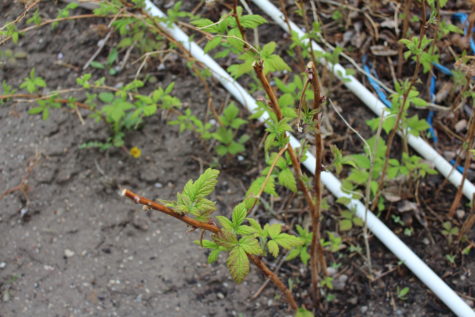 These pruned canes will now continue to produce down the cane in early summer. Once the cane has finished producing it will die back. The cane can then be cut down to just above the ground level, or you can wait and cut out those dead canes next spring. To help them determine what canes to remove the following spring many gardeners mark the floricanes by tying a piece of yarn on the cane when doing the spring pruning (or you could mark with a bit of paint). 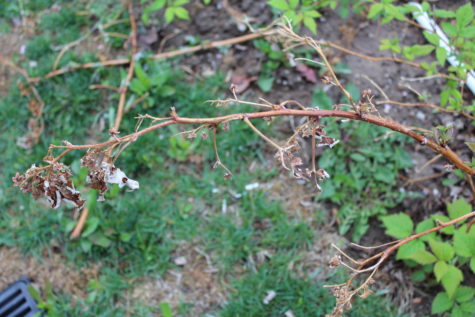 You can see that most of the potential fruit in a cane is on the long end of the cane that bore last year. So this years crop (the early summer crop) will be small! For this reason, many growers decide that method #1 is too much work for too little reward.

If you are like me then you may think that method #1 is a whole bunch of work!! The first year we grew ever-bearing raspberries I used method #1 and then to be honest with you I got tired of it!

The far simpler method for Pruning everbearing raspberries is to simply forget about the early summer crop and prune for one larger fall crop. 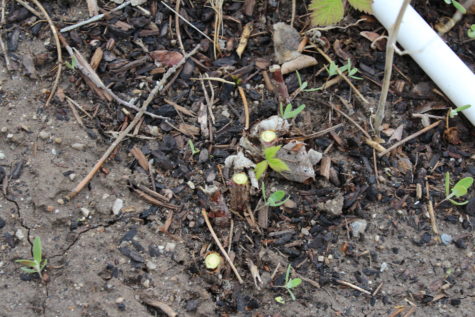 This is accomplished, also in the spring, by simply cutting all of your patches first-year growth down to the ground. My patch is not overly large so I just use hand pruners and cut the canes within an inch of the ground in late March. You could also use a pair of sharp hedge clippers to “munch” your way through the patch. The new canes grow up from the roots of the plants and produce an abundant crop in the late summer and fall. I even know a few people that simply prune their patch by running all of the canes over with a lawnmower!!! I really don’t recommend this method. It can damage the base of the plants and the rough cut from the mower allows more room for pests to enter. BUT if you really are that pressed for time the mower method will work. 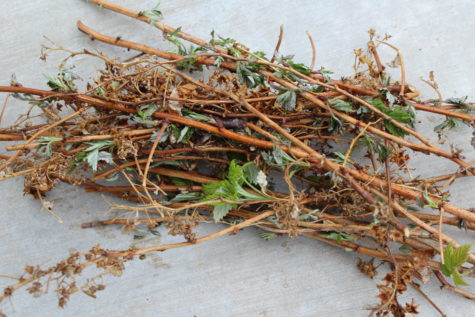 Along with the simplicity and time savings of method #2, there is another added benefit to the fall crop method. Because you have removed all of last years plants there is less competition for resources in your patch. This makes for stronger, healthier plants that then go on to produce an even heavier crop of fruit in the fall! 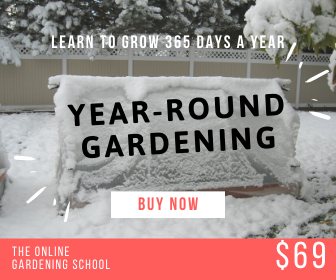 Here is a list of some of the many available everbearing raspberries. This list doesn’t even come close to listing all the different everbearing varieties but will give you a place to get started.

Stay tuned later this spring, my plan is to film a video when I prune my patch.  I will demonstrate both methods for pruning everbearing raspberries.

WARNING: Please keep in mind that either of these methods is meant ONLY FOR EVERBEARING RASPBERRY VARIETIES. Traditional June-bearing raspberries and nearly all varieties of Blackberries are pruned much differently!! Make sure you have ever-bearing varieties before using these pruning methods. If you try method #2 on June-bearing raspberries or any blackberries you will NEVER get any fruit!! 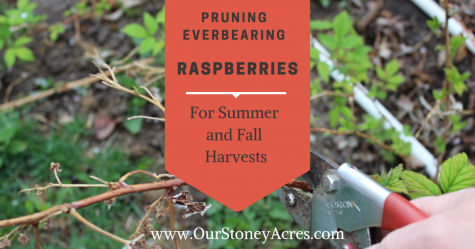 When to Harvest Apples
A Complete List of Cool Season Vegetables
How to Know When to Pick Your Peaches
Pruning Tomatoes for plant health and production
Curing and Storing Onions for 10 months or more!
30 Vegetables That Grow in the Shade